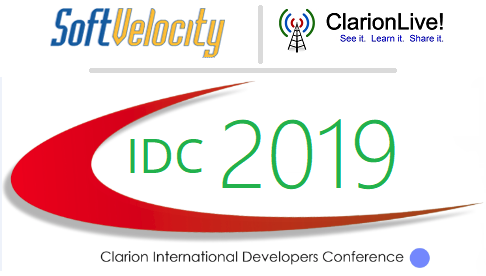 Training
Two additional days of training are available for the two days prior to the conference.
This year we have doubled-up on the training with two rooms being utilised for training for the whole of the two days.

Host of the weekly Noyantis User Group Webinar on ClarionLive, Andy is no stranger to the Clarion community. Introduced to Clarion in the DOS era he has developed a wealth of experience in numerous different fields. Since forming Noyantis in 2008 he has been creating easy-to-use, intuitive and modern software. Noyantis has specialised in the wrapping of OCX controls, first with Codejock, and more recently with Chilikat controls, as well with several others.

When not helping Clarion programmers make their lives easier, Andy is a fan of Everton FC and the McLaren Forumla 1 team, a combination guarenteed to make you look forward to Mondays.

Andy will cover how to make each of the Codejock UI type controls not just aware of each other, but to actually interact and work together to create a modern, usable and feature rich User Interface. At the end of day one, you'll walk away with an example application that can be used as a live template application going forward.

In this ever changing, shrinking world, its important that our applications are able to communicate with external data sources. Andy will cover both the basics and the advanced topics of talking to external APIs - using the data formats that those interfaces require. Working examples will be created that include your application talking to various online facilities such as Google, Dropbox, eBay, Paypal, SMS, EasyPost, QuickBooks Online and Xero to name but a few.

To ensure the workshops run smoothly, numerous "snapshots" of the development applications (in stepped development states) will be provided. Don't panic if you think you can't keep up, you won't miss a thing and you will have copies of all the steps to refer back to for future reference.

At the close of each day, you will also have the opportunity to review the day's activities, ask questions and give feedback. If you have a specific idea, problem or just want to check you're doing things right - this is the time to ask!

Bruce has been working with Clarion since 1992, and has been a fixture on the global conference and training circuit since 1997. A regular host on the weekly ClarionLive webinars, Bruce also hosts a weekly NetTalk User Group webinar. He and his team at CapeSoft have authored over 50 Clarion Accessories including the collossus that is NetTalk, which will be the focus at this year's training.

When not in front of a computer Bruce likes to play a spot of golf, where our sources claim he names his ball right before hitting it. Alas, from the results, it would seem his balls are not as well trained as their namesakes.


Day 1 will focus on NetTalk Server.

The goal of this day is to return to the underlying concepts which underpin the creation and deployment of web applications. NetTalk (and especially the Web Server part of NetTalk) has grown to the point where it is no longer possible (or desirable) to cover all the possible settings and features. So this day is designed to cover all the important topics, things you will need to know in order to create and deploy your own web servers.
Updated for 2019, all fundamental aspects of the development cycle will be covered including:

Starting from scratch Bruce will demonstrate the techniques used to create the CIDC Mobile application. Items covered will include: The CIDC Mobile App will be available for installation, and use, during the 5 days of the CIDC event. Source code for the resultant app will be made available as an example to training attendees.

Provision (or not) of Morning and Afternoon refreshments and Lunch are to be announced.


All times and subjects are provisional and are subject to change.